To be honest, after the 2nd day I can’t palate another Indonesian dish. I was craving for spaghetti or something cheesy instead.

Mr Husband seems to love its food. He had Lontong, Kueytiew Ala cina, Nasi Daging and such. I could only stomach the Nasi Penyek whole heartedly as it was a familiar taste. The rest of the cuisine was just too spicy for my liking. We did however splurge on their snacks and brought back loads of interesting tidbits as ole-ole (souvenirs). You could try bringing back home its delicious brownies, their local chocolate confectionary branded as MONGGO, bakpia, fruit cake, kerepek pisang sale (pronounced as sah-ley), Good Day instant coffee and of course Indonesia’s pride.. teh kotak or teh botol.

I drank the teh kotak till I pee-d the clear colour of pure spring water. That’s how much I loved it.

Overall, it was a pleasant and safe trip. We enjoyed it very much. We did not suffer from any food poisoning nor were we at the edge of getting mugged. We did however exceeded our hand luggage 7kg limit and had to ‘rearrange’ a few things in the bag.

Day 2 was Free and Easy. We went to 2 places. This was on a Monday.

To be honest I think Taman Sari is officially closed for some official ceremony but the guy manning the place was more than willing to bring this family from Malaysia for a mini tour around the area. I say so because we did not buy any official ticket at an official booth nor did we have to get a camera pass like the ones they talk about in blogs.

Anyway, we were grateful for the personalized tour. Even if the guy lied about the history of the place we’d just swallow it whole like a kindie kid. In truth, he did not lie. Instead his face glows as he tells the story of the place.

Taman Sari is interesting and one could easily get lost within the many spiraling and small streets. This place was once a place for the sultan to rest and play. Now, the compound is inhabited by the locals who are helping to preserve the taman  for tourism purposes. So to get to the bath house you’ll have to pass through a housing lane and to get to the underground mosque you have to use the neighbours staircase.. things like that. A palace within the commoners. So don’t be a Scrooge and just pay for a tourist guide.

It’s a very smart and practical place to begin with. And they used a lot of natural influences in building and running the palace. For instance, the king has two beds in his room. One had running water underneath the ‘mattress planks’ for cold conditioning and if its gets to freezing temp, he’ll move to the other bed where there are hot ashes underneath the planks.

We wanted to continue with a visit to Kraton. But it was also closed for an official event. So we got on a beca and headed to Malioboro – a shopping destination.

Malaysians just like our Indonesian cousins are obsessed with clothes and batik and such.

We bought memorabilia items like T shirts and keychains. A few batik -like outfits for Hazeeq and his cousins as well. Mr Husband enjoyed haggling for the best price. So I let him do the talking.

We did not rush but once again it rained towards the later half of the day. This time no room service but Mr Husband bought kebabs and tidbits for supper.

We hired a supir for 12 hours but ended up finishing our excursion in less than 10 hours because Hazeeq was getting cranky from the Avanza ride. Our Supir’s name was Fitrah. He was a sub for the original supir Arnaaz, a nice fella we met at the airport. Arnaz was actually our taxi driver from the airport to the hotel.

This was the plan for the day : Candi Borobudur → Gunung Merapi → Candi Prambanan

With such extravagant fee, we had a complimentary 330mls of bottled water each. I was in awe of the architecture of the place and the surroundings. Never have I seen a place so at peace with nature befitting its role as a place for worship. Eventhough I am a Muslim and this place is best known for its Buddha practices, I still wish that some visitors would be more respectful towards it. I hate how some would freely climb onto the sacred structures or out of habit clear their throats on the wonderful green grass. Like, helloooo..

We spent just an hour at the place as the place was getting hotter by the hour with the crowd of people piling in.

Jeep ride : depend on chosen route

We had doubts on whether Hazeeq would enjoy the jeep ride. We chose the shortest route which was still a 1.5 hour journey that cost IDR 300K per jeep. I wouldn’t recommend this jeep ride to pregnant mothers, elderly with bone and joint problems, a heart condition, severe asthmatic sufferers or those with anxiety attacks.

We also had an overly enthusiastic jeep driver who even directed certain photograph poses for us. We couldn’t help noticing that slight irritated tone when Mr Husband can’t seem to follow his instructions on how to pose. Ha ha ha.

We wanted to pay the foreigner fee (very honest tourist we are) but was ushered to the local’s ticketing office instead. So we were like, ‘okay…. ‘. We got in with a local price and again I was struck by its magnificence. A Hindu temple in almost ruins during the earthquake.

The walk around this candi was quicker as there were less space to cover. We spent more time on lunch and feeding the deers. Even Fitrah, our supir was surprised at how fast we finished the trip. He even offered to take us to one more place to finish the 12 hours as promised. We declined. We needed to rest. Hazeeq needed a nap before he morphs into Hulk.

On our way back o the hotel it rained. So dinner was again, room service. I have to say it was an exhausting 10 hours especially when you’re bringing a 3 year old. Cause sometimes he just refuses to walk and you’re stuck in having to carry him or it could be the complete opposite when Hazeeq would be like this crazy energizer bunny and wouldn’t stop running.

So be advised to have breakfast before even starting the trip and have your lunches promptly. Feed the little monster in good intervals and wear comfortable footwear. Bring a hat. Bring a paper fan. Prepare small change for snacks and water.

RM 559.56 . That was the cost for our trip – A return flight ticket from KLIA2 to Yogyakarta for 2 adults and 1 child plus a 4D3N stay at Cakra Kusuma Hotel. Minus shopping and touring money of course.

I was pleasantly surprised with this hotel. It was rated as a 3 star hotel but hey.. it was worth all the money we paid for. What was important was not only the cleanliness but the kind hospitality they offered to my kid. It was like a small resort in its own world. At one time you’re on the busy streets of Yogya and once you’re in the facility, you’re like in a different place. Very cooling and relaxing.

There were a few setbacks:

We had to weather the rain to get to our rooms situated further back from the roofed reception. Especially now when its sunny during the first half of the day and like a meteorological expert – we can predict the rain to pour by 3PM everyday. Thank god for in-house umbrellas.

There was no fridge in the room. We had a leaking sink and the walls were not soundproof.

But they compensated well:

Hot showers, daily complimentary bottled water and beverages, free basic toiletries, a resourceful reception and fine room service dining. At least we can still experience Indonesian cuisine within the comfort of our own room especially when it rains during dinnertime. We enjoyed the Free WIFI most, so Mr Husband could VIBER his parents back home and upload the pictures on FaceBook.

Would I stay at this hotel again? A definite yes.

Yogyakarta – a small city in all its elegance and rich natural history. If it hasn’t for a few friends who studied in Gadjah Mada university or the UNESCO wonder – Candi Borobudur, I hadn’t thought of making Yogyakarta a holiday destination. But I’m glad we spent a few days there. It was beautiful. 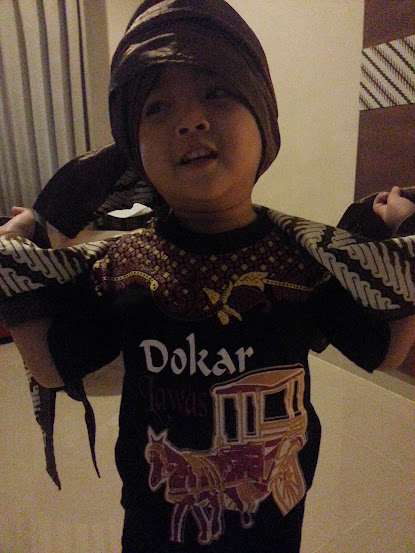 This is a brief itinerary of my travels for a 4D3N stay at Yogyakarta. As usual its toddler and Muslim friendly.

A breakdown of the itinerary coming soon..