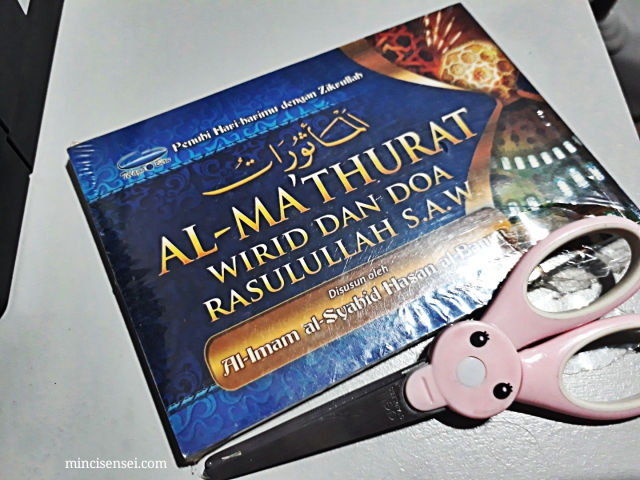 When Pakcik *Nawi decided to give me his copy of The Mathurat many years ago, it was never just a random gift. It was Allah’s mega plan. Allah was at his Most Merciful and Kind to arrange that Pakcik Nawi, should he ever died of his disease – he will get a supply of pahala through his amal jariah even without him being aware of it. Because InsyaAllah I will read it.

Pakcik Nawi was one of those patients who likes to frequent the emergency unit of my previous district hospital for minor ailments. Yes, he has hypertension and all that but above all, he was a ‘regular customer’. The kind that medical assistants can’t seem to turn away because ’emergency’ was the only place he knows where to get his supply of foot cream and fever meds.

One day he came and I greeted him happily. He was a man of little words but a smile is always plastered to his face. He was illiterate but gentle in manner as he nodded respectively while pointing at the hyperpigmented area on his foot. He was never able to describe properly what was wrong with the foot – he just wanted to apply something on it. Hence, we have to make an educated guess of what the problem could be. one day, after handing him the prescription slip, he took something out from his shirts breast pocket.

It was a brand new Mathurat. Probably given by someone else too and he said

I thanked him for it, kept the Ma’thurat away and never thought about it until recently.

The last time I read the Ma’thurat religiously was probably in high school. I could even memorize the Du’a and Zikr by heart. The words would just come out from my mouth smoothly like running fluid. After graduating from school, perhaps distracted in the race to pursue a medical degree and so called ‘life’ – I have quite forgotten about it. Not only the Ma’thurat but also my weekly Yasin recitals, the extra solat sunat and sadly Tarawikh even. Sangat lompong my Tarawikh. Not consistent.

Which is why I was grateful when Ayesha came to town with her Quran Tagging programme. It was an opportunity to reconnect with the Quran and Islam. It also made me reflect on why Allah is SO kind and Most Merciful and Thoughtful to have bestowed me an insyaAllah blessed marriage and these children – especially NOW with a daughter. * A different post about daughters later*. The usrah with Ayesha reminded me of the Ma’thurat again – my forgotten amal ibadat.

I have a few copies of The Ma’thurat at home but somehow I was drawn to the one given my Pakcik Nawi. It was still there on my shelf in its packaging. I’m not quite sure what has happened to Pakcik Nawi now but I hope that the pahala I got from reciting the mathurat will in a way fill up his pahala weighing scale as well and that it will help him on his journey to Jannah. InsyaAllah. For Allah The Most Compassionate, The Knower of All has planned for it that way.